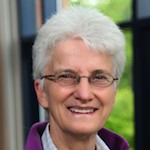 Sarah Douglas is a Professor of Computer and Information Science and a member of the Computational Science Institute. Her interests in teaching and research are in human-computer interaction (HCI), a topic that she has helped pioneer in computer science. Dr. Douglas came to the University of Oregon from Xerox Palo Alto Research Labs where she was a research intern from 1980-1983. Stanford University awarded Dr. Douglas the Ph.D. in 1983, and a M.S. degree in 1980. She holds an A.B. from the University of California, Berkeley. She is the recipient of grants and awards from the National Science Foundation, National Institutes of Health, Fund for the Improvement of Post- Secondary Education, Computer Research Association, Keck Foundation, US West, Apple Computer, and Intel Corp. In 1991-92, Dr. Douglas was a Fulbright Lecturer in India. Dr. Douglas has served on the editorial board of the journal Interacting with Computers, and is a reviewer for ACM Transactions on Computer-Human Interaction and the ACM CHI Conference. At the national level she was the Chair of the Human-Computer Interaction Knowledge Focus Group for the IEEE-ACM Computing Curriculum 2001. She is the author of over 70 technical papers and a book, The Ergonomics of Computer Pointing Devices, published in 1997 by Springer-Verlag.